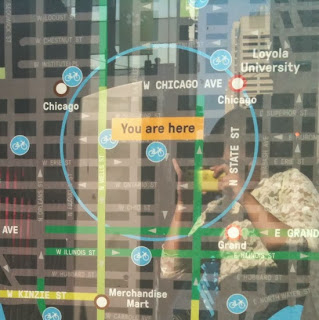 Recently I got to use the new Divvy bike share system in Chicago.

When I'm nervous on a bike, as I was in this case because I don't usually bike when I visit Chicago, I tend to ride as fast as I can. I found that I couldn't keep up with traffic on the three-speed Divvy cruiser; even in my silly cowboy boots I had greater pedaling potential than the little chain ring could realize.

But for the short ride, my limited speed didn't seem to matter. No motorists honked at me or swerved dangerously close to me as they passed, even though I saw many examples of the kind of behavior that angry road users point to as evidence of bike users being jerks. I would stop at red lights, only to be overtaken by men who pushed forward, looking to see if the intersection was clear and proceeding through when it was. Traffic signals applied not to them, it seemed, but to the taxi drivers who similarly pushed forward and stopped only reluctantly when bodies passed in front of them. I had noticed before how people, whether on foot, on bikes, or in cars, push forward into intersections with more gusto east of the Rockies than they do in the west that I know.

What I'm getting at is that bike share systems go into place in spaces where there are existing standards of road behavior, and having access to the bike itself doesn't necessarily give you access to those standards. Not only do built environments suggest to us how to use a given road space, we carry with us ideas about what should happen there. I'm not pointing this out as some grand flaw in the bike share model, but rather to illustrate an academic concept. In processing my experiences as a bike advocate in Los Angeles, I started thinking in terms of the "body-city-machine" because I found that riding a bicycle involved at least three components: a human body with a particular worldview, specific kinds of technologies for riding, and a shared street. I came to the body-city-machine from theory about sociotechnical "assemblages," which describe how action happens in the world through more than individual bodies: we form "alliances" with objects. This is how many bike researchers, such as Zack Furness and Luis Vivanco, talk about the social life of bicycling. What I've tried to understand through the body-city-machine assemblage is what kinds of mobile places people create as they travel, building on the ideas of researchers like Justin Spinney that the street is not a space devoid of meaning.

I developed the body-city-machine concept to suggest a more holistic perspective for mobility in general. But because I do most of my thinking through bicycling, I'm also interested in how the idea can help create more inclusive advocacy and programming. As activists, we usually focus on one aspect of this equation. In vehicular cycling, for example, the emphasis is on the body: making the body fit to use existing roads. Lots of bike advocates feel that this model excludes people who don't fit a certain type because they recognize that there are many kinds of bodies using bicycles.

What I have seen in my years as a bike advocate is that most of my collaborators focus on changing how people use streets through changing the design of the street itself. In this paradigm, the emphasis is on the city: designing environments that are expected to stimulate behavior changes. I have concerns about this model because it has become part of a "creative economy" strategy that actually fails to provide economic opportunity for most people. As much as a Jane-Jacobsian vision of quality public spaces is a nice ideal, the reality is that our public spaces are surrounded by privately owned parcels and structures whose value fluctuates. What's good for the property owner may not be good for the unemployed or low-income bike user.

In addition to these concerns, though, it could be that I am not as convinced by the need for infrastructure because I'm a very empowered urban cyclist, and while I prefer to ride on quieter streets, I'm comfortable taking the lane in traffic. I've observed quite often that bike experts speak from their own experiences and expect others to share their perspectives, and I'm certainly not immune to that. In my work this tendency is actually an explicit strategy because ethnographers work backwards from experience to try and identify underlying patterns to behavior. I've been an ethnographer among bike advocates for some years, and I can vouch for the fact that bike professionals, too, are body-city-machines.

What I am seeing now, in my conversations with other advocates of color as a member of the League of American Bicyclists' equity advisory council, is what innovation can occur when people bring their varied experiences and cultures to bike advocacy. I realized in conversation with Eboni Hawkins and Anthony Taylor that a shared identity across other lines might help blur the lines between different kinds of bicycling. A recreational cycling club, something I hadn't thought of as an advocacy organization, could be interested in promoting more transportation cycling among people who see having to use bikes as an indicator of low status. 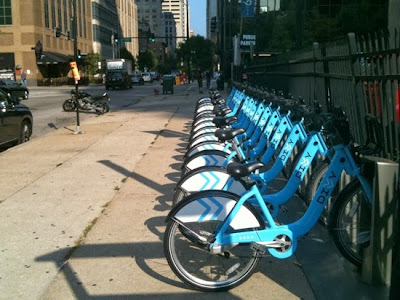 If the ultimate goal is to change human behavior, why should street design be our only option? Unlike environmental projects, such as bike lanes and cycle tracks, bike share programs seem to focus more on the machine part of the equation: making bicycles available for use. Similarly, open street events also change how people share streets through manipulating what technologies one can use to travel in them.

Of course, it's hard to really separate these elements; that's the whole point of the body-city-machine concept. For example, the placement of bike share stations is a spatial issue, and Chicago seems to have a lot of discussion going on around their bike projects seeming more symbolic than useful and a need for equity. But bike share does help illustrate how we can experiment with the constituent elements of the body-city-machine. I'd like to see more advocacy strategy that starts with bodies, not necessarily as effective cyclists, but as social actors in a shared space. I'd like to see more incorporation of diversity at a strategy scale, rather than hearing about campaigns that ask leaders of color to say yes to preconceived projects. I'd like to see what happens when we make room for a diverse range of body-city-machines to participate in redefining what bicycling means.
Posted by urbanadonia at 10:37 PM