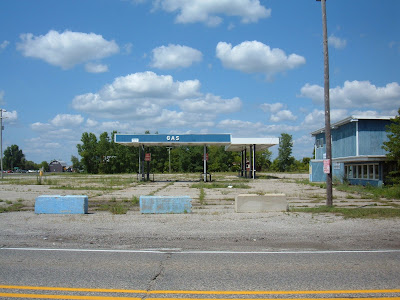 We left our host's home in Grand Rapids around 10 am on a Thursday and hit up a local sporting goods store to get a gazeteer that showed us Michigan's streets in more detail than a folding map would.

We rode rode rode along Grand River Avenue for many miles, passing through some small towns. We stopped for lunch at a place that made pies, bread, and pastries. Delicious English muffin bread! So not all of America's wholesome food producers have been destroyed by Wal-Mart and Costco and fast food.

When you're cycling at speed along verdant highways, you catch a lot of bugs, just as a car windshield does. Occasionally I'd feel a little slap as some bug or other lost its life against my skin. At least they didn't splat on me, just glanced off. On our first day of riding it was worse, because the bugs were butterflies and they kept flinging themselves into our bike wheels.

The air was hot and damp, but we kept up a wind by riding fast across the flat plains.

Lots of clouds, corn, and soybeans. Actually we didn't see any other crops. 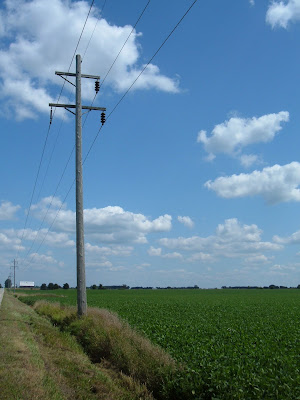 Some fields had little signs stuck in the ground at intervals along the road that specified what genetically modified seed was growing in that section. Creepy stuff.

We had intended to make it to Lansing on our first day, but then we rode into charming Portland. Though this little town has a well-maintained little Main Street, there are no hotels in that section. We had to bike out to some chain motel located next to a freeway interchange a few miles away. However, Portland has a collection of river trails that allowed us to bike from our motel to the restaurants in town looking at old bridges instead of dodging highway traffic. 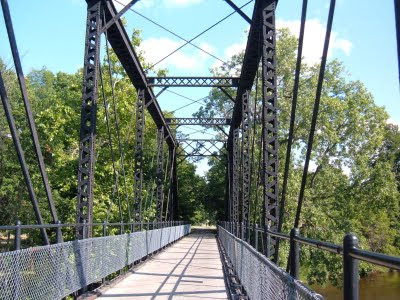 This was a very pleasant surprise; we hadn't expected bike facilities in rural Michigan.

When we biked back to the interstate motel after a large cajun dinner, many fireflies lighted our path eerily through the green corridor we followed.
Posted by urbanadonia at 8:00 PM