We spent a day wandering around Grand Rapids while our legs recovered from our first day of distance biking.

Grand Rapids is home to an old farmer's market from the early twentieth century called Fulton Farmer's Market. Our host took us there on a Wednesday, and introduced us to a manager who also happened to be an anthropologist. She's done work on Polish social clubs and is wrapping up a master's thesis on farmer's markets. (There's a lot of fodder for anthropologizing in alternative exchanges like these). 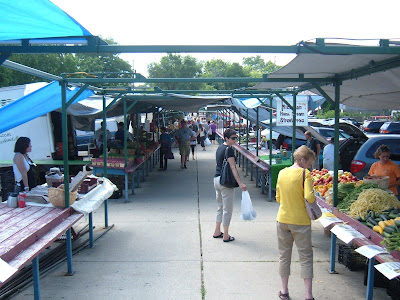 We bought some jam, even though the vendor really wanted us to buy hummus. It's a free country, damn it!

Grand Rapids has an old downtown a few blocks east of the Grand River that runs through the city. This old downtown has been revitalized and there are a lot of bicyclists. There are also events held at night that include hundreds (!!) of teenagers having good clean fun. We witnessed a swing dancing party in Rosa Parks Square that went on for hours. Apparently they also hold some kind of record for the most people pretending to be zombies at once (one of those pointless over compromised Guiness Book of World Records things). I guess it's good that not as many of them are on the streets doing drugs, but Grand Rapids does have gang activity in some areas. The local media, however, has a policy of not covering gang-related violence because it might lead to more gangs. Hmm. 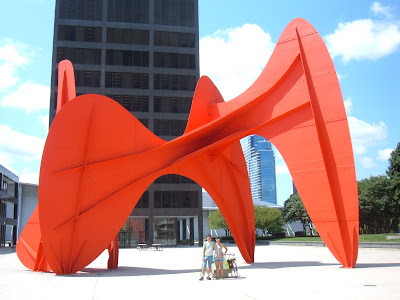 You know what else Grand Rapids has, a Gerald R. Ford museum! Sadly we did not make it there, but I'm sure I would have gotten totally into Gerald R. Ford if we had.

Since we were staying with a prominent bike advocate, we got to listen in on one of the first meetings of the Greater Grand Rapids Bike Coalition (something like that). It took place in the delightfully appointed home/ studio/ gallery of a local artist in a converted building that was pretty fancypants. Then our host took us to the Motion Initiative workshop, pictured below. 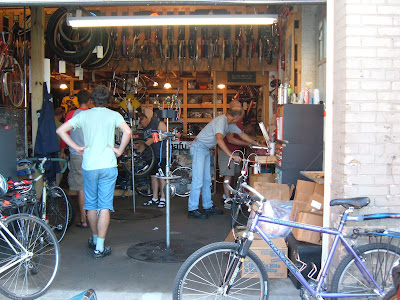 This place, which takes up two adjacent garages and also uses a large basement for bike storage, started a few years ago out of the backs of two guys' trunks. They wanted to show kids how to repair bikes, and built up a mobile workshop and now have this large location to work from. The Motion Initiative differs from other bike workshops in its Christian mission, though Dwayne, one of the founders, told me that they've preferred to follow Christian guiding principles rather than adopting an in-your-face, proselytizing model. I like the mobile workshop, and they've been able to give bikes to ten children through their volunteer credits program.

After this we visited local watering hole Founder's Brewery. This place supplies beer to a lot of local people, and we'd heard about it numerous times before we actually made it there. It was SO LOUD. I mean, I spend time in bars, I know loud, but damn, they kept cranking the volume up as the evening wore on. Guess what I've learned about the Midwest: people loves em some beer, and more please.
Posted by urbanadonia at 8:00 PM